Written by Vapor Dave on November 7, 2017. Posted in ICBC Kauai. 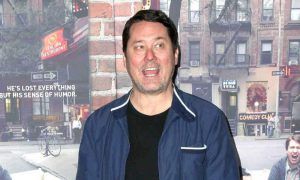 This article originally appeared in High Times magazine Nov. 6, 2017 in the format of an interview by Russ Belville.

Besides Cheech & Chong, the comedian most associated with marijuana is Doug Benson. He’s made a living off his laid-back stoner persona for over a decade, on stage with “The Marijuana-Logues,” on film in Super High Me and on the small screen with his most recent venture, The High Court. But Benson is also known as a comedy and film aficionado. His “Doug Loves Movies” podcasts are recorded live with an audience as he demonstrates an amazing breadth of knowledge about television and movies.

Benson is also adding his talent to the cause of growing the cannabis industry. He’ll be hosting a VIP reception at the International Cannabis Business Conference on December 1 in Kauai, Hawai’i.

I spoke with Doug Benson by telephone to discuss the intersectionality of legalized marijuana, the cannabis industry and the influence of pot on television and movies.

Russ Belville: I wanted to talk to you about how things have changed since legalization. We used to have Cannabis Cups and cannabis cafés up here in the Pacific Northwest. Since we’ve legalized, they’ve kind of gone away. You’re well known for being a cannabis comedian. Has legalization changed things from your perspective?

Doug Benson: It does feel a little like bit like there’s certainly less excitement or fever for the idea of “this guy’s gonna talk about marijuana” or “this guy smokes a ton of weed” and then comes out on stage. You know, people are more, um, relaxed about it, I guess?

RB: It’s not so shocking anymore?

DB: Yeah. It’s funny, because there was always, along the way in my career, as more and more I made marijuana a part of my act and my life, the more I’d hear from people saying, like, well, part of the reason that everybody likes it so much is because of the excitement of it not being legal.

You know, I always thought that was silly. Especially when it comes to smoking marijuana. People are certainly not less interested in it now that it’s legal. I’m sure there are even more people smoking than ever, especially ones who are willing to admit it.

In terms of comedy, it has kind of shifted a little bit in that it seems like the novelty has sort of worn off a little bit.

RB: Is that mostly in the places that have made changes, like California and the rest of the West Coast? Do you still get some people that are shocked and, say, amazed by it in Alabama?

But before legalization started happening and since, I’ve been happy to go anywhere because, you know, as a fairly discreet white male with money, I can pretty much smoke weed anywhere I go and get away with it. I still feel a little bit of that, like, oh, this is illegal here, I should be careful. But, uh, it’s certainly—especially if you look at the national polling numbers—like people are just pretty accepting of it these days.

RB: Yeah, it seems like the shock factor is kind of wearing off. But that leads me into another area of questions I wanted to talk to you about. You’re well known for the “Doug Loves Movies” podcast, you’re a big fan of movies and TV and that sort of media. And you know, back in the day, even just a decade ago, Showtime comes out withWeeds and it’s a big shock—a story about someone selling pot!

Now, Netflix comes out with Disjointed, and it just seems kind of passé. What do you think of the media’s treatment—TV and movies’ treatment—these days, post-legalization?

DB: I haven’t watched Disjointed because I’ve had too many people tell me it would make me unhappy because it’s kind of like, um, it feels like having something take place in a dispensary, but there’s a live audience just laughing at everything everybody says. Like I said, I haven’t seen the show, but it feels like it would ring incredibly false.

But in terms of the overall treatment in the media, I think it’s great that more movies and TV shows are tackling it. It’s kind of interesting—if you have anyone smoking pot in a movie it automatically, I think, knocks it up to maybe PG-13 [movie rating] and if there’s a lot of it, even an R rating, even though chances are it is a legal activity in whatever place the film takes place.

But my biggest beef is that, like, AMC’s The Walking Dead is like the most successful weekly television program on TV right now, or at least it was the last time I looked. And these people are living in the apocalypse, and they’re going around scavenging, getting anything they can find, and then using it to survive. And no one has ever talked about or smoked marijuana on the show!

DB: That would be a great time for there to be a character that’s like excited to be able to smoke all the weed or maybe upset that the zombies are keeping him from the weed.

RB: Or, what do you know, they find out that cannabinoids actually kill the walkers and they start shooting them with weed?

DB: Yeah, that would be great! Or, maybe it has the opposite effect for them; it makes them less hungry. They’re not so hungry for flesh if they just smoke a little weed. That’s kind of frustrating for me because I do love that show. It’s been how many seasons, seven or eight seasons, and it doesn’t even come up?

Part of the reason I’ll bet it’s never come up is because of the network and the show kind of considers itself family entertainment, even though it’s got all this murder and mayhem every week, you know?

RB: Interesting that we can see the blood and viscera, but someone smoking a joint, oh, we want to keep the kids from that!

Now, just kind of a fantasy question for you: Marvel Cinematic Universe or DC Universe, which is cooler and which character would you most like to smoke a joint with? Probably not The Flash, because he’d go through your shit way too fast…

DB: [Laughs] Yeah, and he doesn’t stick around to share. You pass the joint and then he’s gone. I’d have to say, uh, I’m the voice of Bane in The Lego Batman Movie, so that would definitely be my choice, to see if Bane could even smoke with that mask that he’s got on his face.

RB: He’d have to have like a special adapter or something.

DB: Yeah, and also, would that mellow him out and make him not a bad guy anymore?

RB: We ought to see what weed does for The Hulk, maybe chill him out a little bit.

So, let’s talk about your career. Last I saw on Comedy Central you were doing a show called The High Court. It’s kind of amazing to me that we’ve come to an era now where people are actually smoking weed on TV and talking about it. Did that shock and surprise you and is there more of that coming?

DB: Well, I hope there’s more coming. You know, after the initial run of The High Court, it became very clear that we’re still not in a great place when it comes to genuinely consuming marijuana on television. Comedy Central had trouble securing big sponsors and big advertisers, the kinds they’re accustomed to for all of their other shows, like South Park andThe Daily Show and what have you.

That was one of a few reasons that they gave me for not picking up the show. And then I see other shows where—you know, there’s a channel, VICE, and they’re definitely fully immersed in the weed culture, it’s a great network—but pretty much everywhere else that’s advertiser-television, they may talk about smoking weed, but they’re not showing it, and if they do, it’s just pretend, you know, some sort of fake weed they smoke for the cameras.

So that’s frustrating that we’re still not there on that. But, at the same time, just the fact that I got a show like that on at all without too much pushback from the network—the main thing they were concerned about was safety, So, inside the soundstage where we shot the show, we came up with all of these ways to make it so that nobody that maybe didn’t want to get high was anywhere near the weed whenever we’d smoke it. Then, they also had this complex ventilation system, so that even though it was a gigantic soundstage, people were worried that it would get hotboxed and people would get a contact high. [Laughs] They went to a lot of trouble to make sure that it was done safely. Then we also had a big long disclaimer at the top of the show that said, “Hey, what we’re doing here is legal in this state, we’re not breaking any state law.”

RB: I’m imagining the old Get Smart Cones of Silence coming down around you to keep your pot smoke in you.

DB: Well, that’s the thing, you know, is I just wanted to fully commit to getting pot smoking on television, so I was very adamant, because occasionally it would come up, “hey, do we have to see the pot smoking, can we just imply that it happened or say that it happened?” I was just very clear that I wanted it to happen on television. That may have been, in terms of long-term employment, that may have been my biggest mistake, because if we had just said, “We’re going to the deliberation room,” and then winked and left the room and came back, uh, I don’t know, it could still be potentially a show on TV.

RB: Or play that pan-the-camera-around-the-circle like they did on That ’70s Show…

DB: Yeah, they got away with that for the whole run of their show when it was clear what was going on. They even had Tommy Chong in the circle sometimes.

RB: You’re out on tour, are you getting different reactions these days under legalization? Does the heckling change? Is there anything different for you as a comedian trying to work in the legalization world?

DB: Well, people will occasionally throw some marijuana up onto the stage. Which, you know, I can’t complain about. I enjoy that part of it. I’d say the heckling might be some enthusiastic people who maybe come to my show more because they’re excited about marijuana specifically more than me and my comedy.

The greatest thing that still exists is that if it is at all possible for me to step outside the club into some sort of alley or something after the show, because I still haven’t encountered any comedy clubs that—legally they can’t have weed smoking and alcohol at the same facility, pretty much in all the states that have legalized, that’s part of the deal. And, unfortunately, comedy clubs make all their money from the selling alcohol part of it.

So, since there are no venues I can really smoke with the fans in, like I was saying, I step outside and pretty much every show I do there are some people out there and we have a nice little session.