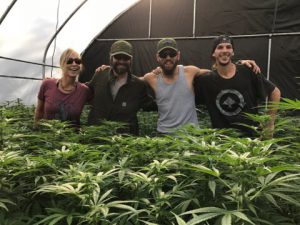 Paul King decided to “go big or go home,” when he started his cannabis cultivation business in California, and he indeed “went big” with 150k sq ft of greenhouse cultivation in the Golden State. It should be expected that Paul would indeed go big in the cannabis space after being named one of the top 25 entrepreneurs under 25 by BusinessWeek back in 2009.

I was glad that Paul spared some time to chat ahead of his appearance on the “Investing in California Cultivation” panel at the upcoming International Cannabis Business Conference in Kauai, Hawaii, starting December 1st. With California starting adult-use cannabis commerce on January 1st and just releasing state regulations, the panel couldn’t be timelier.

Anthony Johnson: What brought you to the cannabis industry and when?

Paul King: I️ was always a fan and consumer and once I️ learned about California, that I️ could grow legally, I️ was on a mission.

I evaluated the market and saw that cultivation was the core of the industry and we wanted to go big to be sustainable and make the economies of scale work well into the future stages.

With California moving towards statewide regulations, as well as local rules, governing cannabis commerce, how are you feeling about the upcoming market?

California is such a huge market, with incredible potential. It is exciting to have an opportunity to succeed in the world’s 6th largest economy. Overall, I feel good with California rolling out regulations. We have a team to keep us compliant, from all of the paperwork to testing. I look forward to competing with the Canadians. They’re crushing us now, but I feel like it’s the year 2000 and we’re Google working out of the garage but we’re coming for the goliath, Yahoo !

What areas of California are your cannabis products?

Our headquarters is in Sonoma, under the brand Cannafornia, and we are concentrating on greenhouse grows and are expanding the brand into San Francisco and the surrounding areas.

In addition to cultivating high grade cannabis, you also consult others in the business, how did that come about?

Consulting kind of started by accident. I just kept meeting people that wanted assistance, and through word of mouth, people started approaching me about cultivation and other licences, in California and then in other states as well. We enjoy guiding people the right way and helping them succeed. It pisses me off to see people get the wrong information from lawyers and get screwed over.

How did you start working with DJ Muggs of Cypress Hill?

Muggs has a property in Sonoma County where he was cultivating, but his initial team wasn’t working out. His cousin Jamie, who handles his business affairs, reached out to us. Today, we help Muggs cultivate, including a great Durban Poison strain that has been highlighted by quite a few dispensaries.

What strains do you cultivate and why?

We grow what the market needs. We like OGs, gelatos, sours and we are always experimenting with some breeding on the side. We’re paying attention to the research being done in Israel on the medical side as well, and will have our own manufacturing and research facilities soon.

Once the United States government ends the folly that is cannabis prohibition, exporting will be a tremendous opportunity for West Coast cultivators, do you see that occurring sooner than later?

It’ll take time, but we hope to have a fighting chance against the big Canadian players soon, as they currently have a huge unfair advantage. We are applying for licenses in other states while they’re buying them at crazy valuations, but hopefully the United States will soon even the playing field. President Trump can’t like the fact that we’re losing to the Canadians on our own turf! We’ll keep pushing on our end and be ready when any new avenues open.

Cannabis flower will always be sought after, but how do you see other products proceeding in the market?

Right now it’s all about scale for growers. Next, it’ll be all about brands. The same way that regular Tobacco farmers sell their tobacco for pennies on the dollar while Marlboro gets a major premium. Cannabis will be similar a few years from now.

Thanks a lot for your time Paul. Look forward to seeing you at the ICBC in Kauai.

Thank you, looking forward to it.

Don’t miss Paul King and a whole host of movers and shakers in the cannabis industry at the International Cannabis Business Conference in beautiful Kauai, Hawaii, at the amazing Grand Hyatt Resort. Paul will cover what he has learned from hands on experience, busting some myths, and providing real insight into the day-to-day operations of a cultivation business. Plus, he’ll be joined onstage by the legendary DJ Muggs of Cypress Hill fame! Act fast before ticket prices increase!