Researchers in Australia recently examined survey data in an attempt to try to identify why support for cannabis legalization has risen in recent decades, specifically in the United States. The researchers leading the study were all affiliated with The University of Queensland, and they examined, “historical changes in legalization attitudes and the period-specific individual and external influences on these.”

“A systematic search was conducted for publications in PubMed, EMBASE, and PsycINFO up to October 2019. Six studies with a regionally or nationally representative adult US-based populations were included.” the researchers stated regarding their methodology.

“A secondary analysis was conducted using data from the National Survey of Drug Use and Health. Hierarchical age-period-cohort analysis assessed the trends in perceived harmfulness and availability of cannabis between 1996 and 2018. Ecological comparisons were made between these perceptions and support for cannabis legalization over time.” the researchers went on to state. 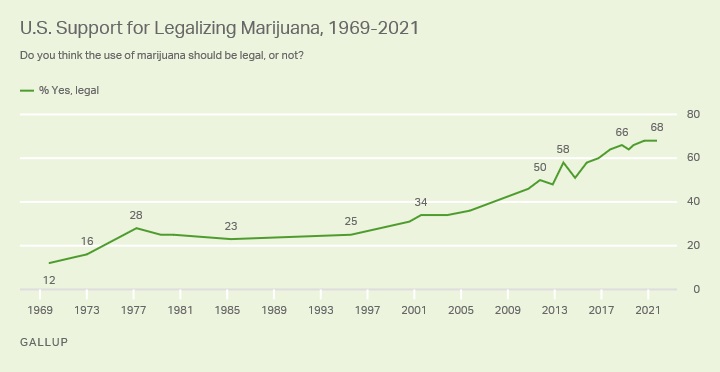 Gallup’s polling is particularly useful because they have asked the same question every year since 1969. As you can clearly see, support for legalization was a dismal 25% in the mid-1990s, and it continued to rise nearly every year through 2020 when it leveled off at 68%.

“Most people developed more liberal views, with no evidence that changes within any one sociodemographic group was disproportionately responsible for the overall attitudinal change. Increases in the proportion of people who use cannabis, non-religious population and political liberalism may partially explain the increased support for legalization.” the researchers determined.

“The decline in perceived harmfulness of cannabis, as reflected in the media, may have contributed to the increased support for legalization.” the researchers stated.

“The US population has become more accepting of cannabis legalization. The attitudinal change is related to changes in the perceived risks and benefits of cannabis use, influenced by broader political and cultural changes over the study period.” the researchers concluded.

The researchers obviously have their views regarding why cannabis legalization has increased, however, I don’t necessarily agree with all of their conclusions. I definitely do not think that there was a ‘decline in the perceived harmfulness of cannabis reflected in the media.’

To back up that personal belief, I would point to the ongoing ‘coverage’ by media companies that are blatant reefer madness propaganda. Mainstream media outlets still regularly provide cannabis opponents access to their platforms and allow them to publish nonsense without any attempt to fact-check it from what I can tell. What has changed is the increased volume of peer-reviewed studies regarding cannabis, and the increased availability and awareness of the results of those studies, many of which directly refute long-standing anti-cannabis talking points.

First, many people have always supported legalization and are only now willing to admit it since prohibition is crumbling and the stigma is reducing. Secondly, people that were on the fence about cannabis legalization quickly move to the ‘supporter’ category when they see that legalization is working wherever it is allowed.

Once legalization goes from a hypothetical to implementation, and it works, many cannabis prohibition talking points instantly die in the minds of many voters. The legalization supporter base expands to non-consumers that just want to see sensible public policy enacted. It also expands to people that want to see society reap the economic benefits of a regulated industry. That is likely why you see polling results continue to improve as legalization continues to spread, at least in my opinion.

Get Your Tickets by June 22, Midnight